SEX AND DESPAIR
A clip for the French film “La Jeune Fille aux mains d’argent”.
The Miller comes home elated, enjoys a few private moments with his wife, but it was not to last.

ORKIMP
A strange landscape, an old oriental woman and some monks. Or at least thats what I had in mind!

THE DEVILS PACT
A clip for the French film “La Jeune Fille aux mains d’argent”.
In this scene the Miller makes a pact with the Devil.

BREAD AND APPLE
A clip for the French film “La Jeune Fille aux mains d’argent”.
In this scene the Miller and his wife share an apple with a fly.

ATMOSTRIP
Not really a soundtrack for anything, but I think it could be, maybe for a night time drive thru the city, ending in a chase?

SilverHands moods+lullaby
The demo piece I made to get the job for the film La Jeune Fille… I got the job and you have already heard some stuff above!

KNEELING AND HEALING
A collection of clips I did as a proposal for a short film, didn’t get the job, but no-one did so.. never mind!

Here I shall try to post some of the work I have done for work. This is usually scoring short sequences for e-learning, interactive films and presentations. Despite being for “corporate” customers, I frankly am unable to produce ordinary, run of the mill corporate crap, as I refuse to believe that people are not totally accustomed to good and interesting sounds, even at work. It is usually just their completely reasonable fear of success or failure that prevails and veers corporate work into the average and the boring. I am simply not able to make work like this.

I am however very concerned with context and target group, and strive for my music to “fit” where it is supposed to.

I hope this page can become a kind of portfolio for future customers and would like to accept more commissions from film and game companies.

Infratek Onboarding
Infratek are a very forward and cool company, having the rather dull and important responsibility of changing Norway’s street light bulbs (among other things) Musically I have never been allowed to get away with more… Thank you Infratek!

KLP Information Security
This music for KLP, was supposed to be a bit of a “secret agent” style, for use in there security program I filmed for them. It was a fun project and a great customer to work with, very open to new things and infact the main character was a puppet! All other “actors” were totally normal business types (and one bad guy) who didnt seem to even notice that their co-worker was a merecat!

Norsk Industri – HMS/Psychosocialarbedsmiljo
This music was written as an “ironic” happy ending music to a very serious episode in the massive HMS program we made for Norsk Industri. The “placeholder” was George Micheals Careless Whisper, which was a hard act to follow, but this was the result.

TINE Onboarding Program
Music for Tine, the big Norwegian dairy, nothing too special here, move along.

Corruption Statoil
This track is a mix of some of the various elements produced for this huge 9 episode Anti Corruption elearning film, that Transform made for Statoil and is also being implemented by the UN. This music was relatively “modular” allowing me to quickly make different vignettes for different lengths. I produced many different versions.

The Side Effect
This track was written for an episode of the Anti-doping program, Real Winner. The episode called for a flash back to the 70´s when many sportsmen were doping as a matter of course. This track was initially inspired by a track by Grand Funk Railroad, and certainly the beginning is a bit of a rip-off!

Out-of-it-marijuana
This track opens the marijuana episode of the “Out of it” program. It took 2 hours to write, based on readily available loops. This shows that within the wonderful world of e-learning, I have have to be creative to a budget and a timescale. It sucks frankly… but, well it’s what I do…damn…

Hydro – Travel Safety
This is cheesy nonsense, intentionally a bit out of tune, cos I love the bit in Manfred Mann’s version of Wild Thing where the guy play an Ocarina… um… that was a statement unrelated to this track… again.. knocked together in.. well 5 hours tops… 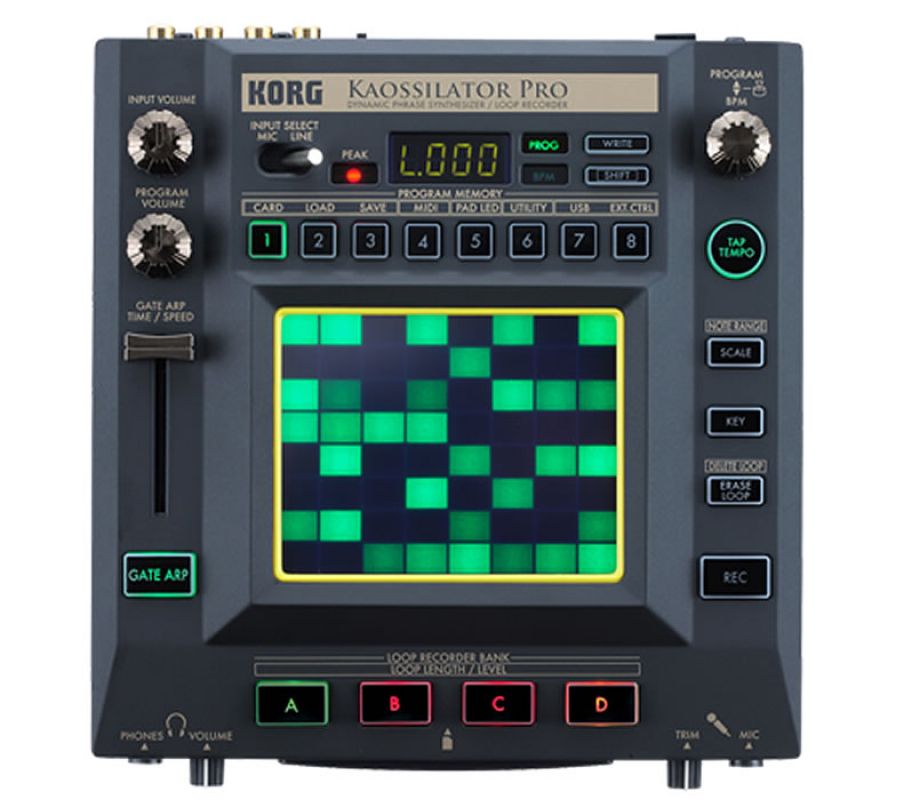 After getting early access to the best music theory app to improve my knowledge and skills,  I have just bought 2 Kaoss pads!
Im loving them… with some reservations/wishes!

I have NOT been so interested in them before now, as..
A) Im a guitarist with only 2 hands. Although I have seen the thing where they have been inserted into some guitars, but only as USB trackpads I think…
B) They are quite a bit of desk-space and Ive been more into space-saving racks tingys

Anyway, I have had my eye on the Kaosscilator, as a synth that can add a quick sound into the looping mix, in a pretty improv way, not much pre-planning. But was put off by the original cos of no midi sync…
But along comes the Kaosscilator PRO. 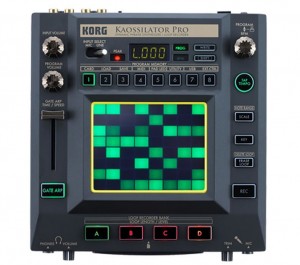 Loving it, great sounds, fast to use. Even Nikolas (5 yr old) is knocking up some pretty cool things on it. It has 8 banks of sounds, divided into leads, Acoustic, basses, chords, soundFX, drums, patterns and vocoder. ALL of the sounds I can use, some for more silly weird shit than others admittedly, but basically no fluff. Picking the right scale took some time for me, nothing quite worked with what I play on the guitar, (not knowing exactly what THAT scale is really!!!) In the end I wrote down MY scale, and found that Aolian was the closest, now it always sounds great with what Im doing on the guitarm and I dont have to worry about WHAT to play ha ha… wonderful time we live in…
I think that the way to save and recall sounds, and loops onto the card is a bit headachy, and I cant quite figure out HOW I wanna do that, Im not sure that Ill save any loops though… well maybe… maybe Ill save some drum loops, if I have made them from scratch… but TBH I dont thank that will happen untill it gets undo… its too easy to make a mistake, for me to want to KEEP that loop… Id much rather make loops on the flay and accept the individual quirks I create.. (rather have UNDO tho… see below) Of course ALL saving ystems are limited when all you have is a little green alpha-numeric screen and not a “proper” LCD with good space to write you patch names…

And then the Kaossilator QUAD. 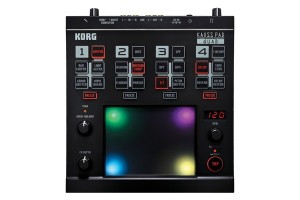 I got instead of the KP3, cos I was interested in 4 simultaneous effects, as I wanted something to put right on the end of my chain, that EVERYTHING, guitar, guitar synth, loopers (3) and the Kaosscilator would go through.


After a few days play I have a few things I would like Korg to take note of, and CHANGE. In the Kaosscialtor Pro, that can send out a new firmware update, as a fix, with the Quad, it will have to be another version of the box, as the Quad has no midi or USB.. or nutting, so no updating there (See gripes below)!!

Kaoscilator.
1. NO UNDO!!! Please fix this!! I need to be able to fuck up an over dub on a loop and then go back one step to before the fuck-up. Even if it was only implemented on the PRESS REC button way of recording, so if you didnt like a loop, you could hit del after insted of Rec one more time, and then remove the new layer…
2. Need a quicker way to delete all, to clean slate… currently its Hold Del, press on all tracks then fumble to the little flashinh write button… whats wrong with a long (2 sec) press of Delete? or Delete AND REC for 2 secs?
3. Hissy on the mic channel when you are NOT kaossing, might just be my mike, but why is the sound OK when I am effecting it?
4. The main criticism is something I wouldn’t have known about if I hadn’t read some Kaoss forums. Apparently the ORIGINAL Yellow or pink one, apparently had a feature where you could get ARP PATTERNS… where are they on the PRO version?
Never remove a feature for the PRO version… ADD features!
If this can be implemented, the ARP PATTERNS could be sorted into banks, like the sounds, but maybe you must press ARP while you press a bank to access them?, once pressed, the ARP button could flash showing you are in pattern select mode, you select one, and then its loaded, and maybe the slider selects variations on that Pattern?
5. Just a gripe about the screen… Can anyone else memorize 200 patches… (not something they can fix NOW tho)

KP4
1. Obvious but… no midi!! No midi synch (Tho I must say that’s not a prob as it syncs wonderfully to input audio, and sometimes its nice to take it off auto sync and hand crank the bpm button.. cool) NO the real reason, is that there’s no update possible, so what we have.. we are stuck with!
2. Why OH WHY??? Cant they have kept the KP3 “record touch” function (or whatever its called). Being able to record your finger movements and play them back would ahve solved for me the “well you are a guitarist” thing… BUT.. I hear that on the KP3 its not possible to sync to the beat via midi or audio, this is silly, I would LOVE to be able to record a finger motion and have that motion “quantise” to the loop. Are we sure it doesnt do that? Ill have to borrow a kp3 to check… Again.. why TAKE AWAY features??
STUPIDO!
3. theres no 3rd gripe!