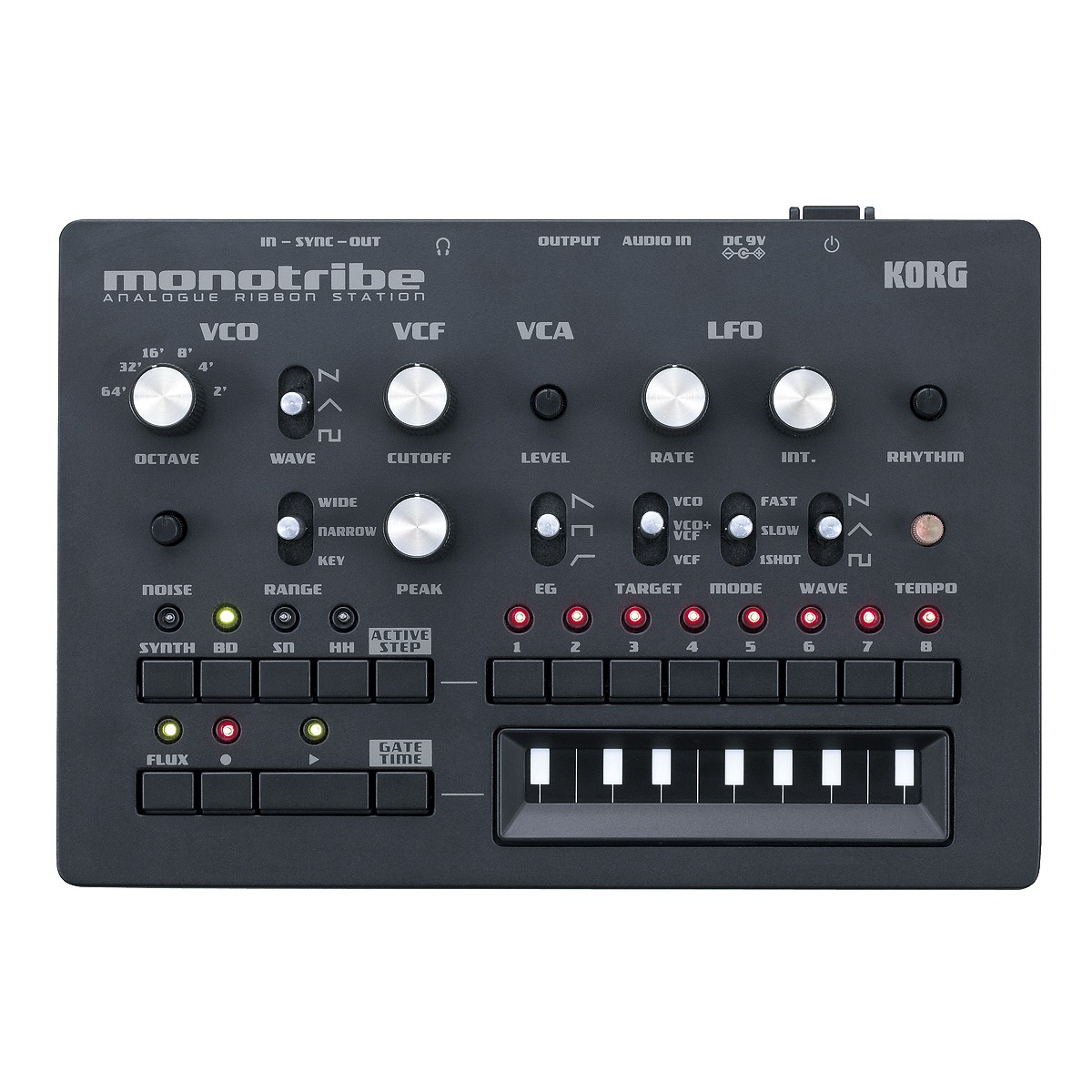 Just a quickie review of the wonderful Korg Monotribe that has been in my hands for a month now.
I LOVE IT!
I got rid of the heavyweight Korg Electribe ESX six months ago, and have been missing SOME kind of drum-machine. Where the Electribe was a STUFFED FULL of features, FX, loads of samples, sounds and lots of tweaking possibilities, I found it slow to use, annoying with menus and some serious irritating lack of functionality (having to stop to enter certain menus, sample start points being impossible to tweak..)the Monotribe is the opposite. Its fun iand intuative from the moment you turn it on.

Firstly the sounds, the drum section is just hi hat bass drum and snare, as it should be in an analog kit the snare is VERY SIMILAR to the hi hat, and the bass drum is punchy and cool.

The Synth is fantastic, with the ms20 filter and various LFO shapes (including the slightly hidden S+H that came in the version 2.0 update) Its sounds totally fantastic! The Q peaks as it should with no distortion as you go into oscillation, the square wave is my favorite, but with the saw you can really WANG it out with a dubsteppy wobble.

Cool hidden features:
The flux thing is interesting, turning the keyboard into a continuous slide, for theremin effects.
The fact that there are “in between notes” resulting in a double resolution effectively 16 steps.
Audio in to the filter.
A nifty shortcut to half speed the whole machine. (nice when you are sending clock to it from a looper and don’t know what speed the drums will come out)
And the killer… ALL sounds can have beats removed… not just muted, but SKIPPED, so you can start a track with totally poly rhythmic mayhem, making no sense.. but then add back in the beats you are skipping, till suddenly it all gels. fantastic. Plus being able to make really long sequences, by skipping ONE beat, on the synth, it effectively only comes BACK INTO sync with the drums once every 4 bars, which gives a really cool and lazy feel.
Rolls.. not VERY realistic, but can be cool, but tends to be good by accident, so an UNDO feature here would have been nice, as you have potential to fuck up your cool groove.
Gate time on the synth can be adjusted by a weird key combo and sliding on the keyboard.

Programming is real simple, just add in notes on the grid. plus they can be “played” on the keyboard.

Whereas the Electribe have MASSES of programs where you could save stuff (but almost never did) The Monotribe is NOT meant to be a “programming tool” its a live tool. BUT I would have liked a way to save (you can save ONE rhythm, that it wil start-up with) not many, maybe 16 or 32 spaces… but something.
No Midi, was fine for me, cos I have a midi to trigger box that I dug out. Plus there are some add-ons available that are highly recommended. I MAY get that later.
No separate outputs for the drums and synth. COME ON.. thsi ones basic.. HAVE to be able to process the drums and synth separately!!! Luckily there is a simple circuit bend I may attempt. Just to take outs from the volume pots of the two sections. YOu gotta have delay on the synth (maybe distortion too for the techno thing).
But my MAIN gripe is… THE 9VOLT ADAPTOR MUST BE A KORG ONE!!!! Doesnt come supplied, BUT even though it takes completely regular 9v DC. They have a socket on the back that is not the standard Boss style Center negative. So I ordered an adaptor from Diago, I thin Center Positive, but that didnt fit either. Nowhere in Norwat can I just BUY a korg PSU. There is absolutely NO NEED to have a special PSU, so why they do that I HAVE NO IDEA. On the upside, the thing goes to sleep after 15 mins on inactivity and I have only changed the batteries once, so they last quite well.

Heres the start of a screenplay Im working on:
Let me know what you think?

In a “well to do” drawing room, 15 naked people eat jelly

BOB
…and I said to him, what a
twat… and he punched me in the
gullet!

HENRY
I hope you killed him!

BOB
I didn’t have time, Mary chopped his head off with a spoon

Both men laugh…
track to other end of table where two women are snogging passionately.