I’ve been experimenting alot with my new Oculus Rift, trying to get my head around what VR actually is… or what I want to use it for. Getting somewhere with that, but this post isnt anything to do with that. My “meet-up” group had a special arrangement yesterday to check out the Microsoft Hololens.

Admirably demonstrated by group member Edd Smith, he explained that although Microsoft are billing it as a “Mixed Reality” device, that its really just AR (Augmented reality) with glasses. Speaking as someone who has always been a bit *meh* about AR, I was very interested to see if it being full face and immersive with the real world would help some… and would that feeling bring to me any ideas for the USE of AR apart from dancing dinosaurs on the breakfast table, or pop up directions on the road.

First let me outline my misgivings with AR. Firstly… there is already too much visual NOISE in the world, I really do NOT want to add more, permanently to my field of view. I dont want ads popping up as I walk past shops, I dont want TV touch controls on the sofa cushion and I dont want “helpful” dancing paper clips, telling me how to use a kitchen appliance.
AR has always been about quite cheezy and ad-centric things, we´ve even considered its use at work, for creating a “virtual” Teacher that can pop up around the workplace, and give you tasks, quizzes, directions and rewards… Never happened though. Just too expensive and yes.. cheezy.
But then along comes Pokemon GO!, and the world goes AR crazy…
Firstly, Pokemon GO! is a great game, well thought out, interesting features and a new application of… AR??? NO.. a new application of GPS. Its NOT a AR game AT ALL… ok, its cute that you can turn you camera on and SEE the pokemons in the living room/street/Playground, however, AR is not CORE GAMEPLAY. Its NOT needed… infact, I noticed that Nikolas, my son has turned off that feature, and just uses the pregenerated backgrounds. (maybe a battery saving action) NO.. the REAL game-play is in the unique use of GPS, the fact that you MUST walk to hatch an egg, is genius, that you must wander about to grab them poke-balls, is fab… that you can fight against others (anonymously) at Poke-gyms, and leave your “Winner” there is super-cool., and there is no doubt that P-GO! is a great game… but its got nothing to do with AR… didnt need it!!!

SO, to the Hololens! 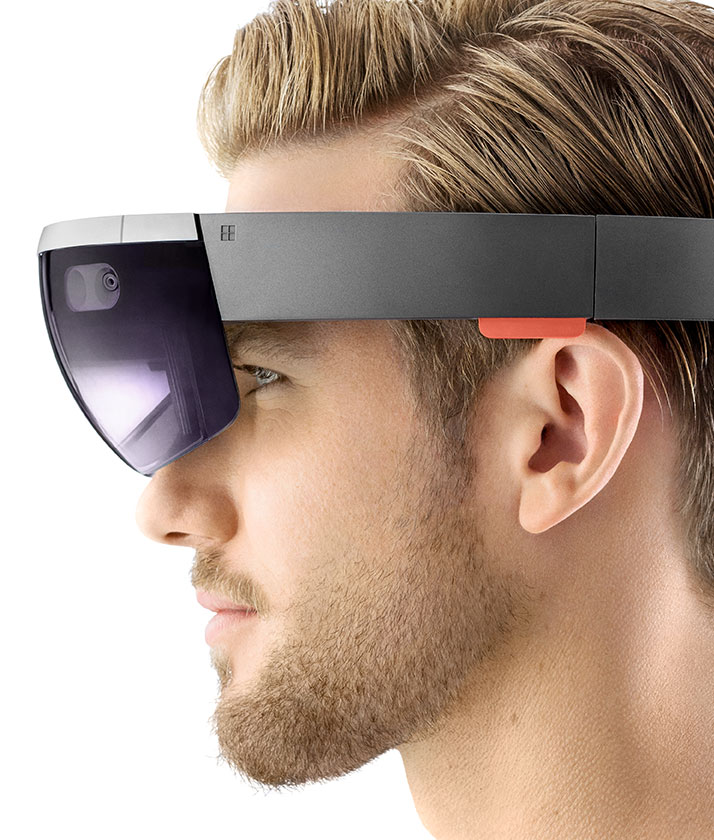 So Im going to put on these $3000 glasses and see 3D objects in the room with me? Ill be able to make gestures in space to interact, and Ill be able to talk commands to it?

Well not so much.

Firstly, the field of view is TERRIBLE… its a tiny 30degree square in the middle of your field of view, so things disappear over that edge ALL THE TIME… the only way to look at things is to, stand along way away, or go in close and only look at one small thing. This to me is the biggest drawback, if its not FULL SCREEN, its basically useless, there is no difference to me in looking through glasses at a tiny square of AR, than holding up an iPad in front of my face.
Secondly, and I admit I hadnt thought of this…no BLACK! So no shading and no shadows! OF COURSE! As the view is NOT a screen, but glass (that is a difference between iPad AR where the background real world is ALSO an image, on a camera, whereas on Hololens its glass, see through glass) so all images are colour and bright overlays on reality, not added to reality. Now, its pretty good, but you wont see a SOLID object, you will see a transparent object.
I must say, that this is also such a big immersion killer for me, that I might have tried to use for example, dark glasses which have a default level of “dark”.. then use brightness to bring up reality to normal, add objects, but still be able to NOT add brightness to areas that should be shadows, but Im sure they cant NOT have thought of that, so its probably unfeasible.
Thirdly and fouthly, the input methods. gestures and speech. Speech seemed to work pretty good despite a noisy room, but I could NOT get gestures to work AT ALL!!! I must say this is probably just practice, as Edd was having no trouble.
OH and Fifthly… THREE THOUSAND DOLLARS??? OK I get this is just for Rand D folk right now, trying to get in on the ground floor, incase its the next big thing, and it may be.. just not now, with THIS tech… its just not very good. The future, might be interesting, but if its just gonna be all about advertising, architectural modelling, and directions.. I dunno… someone has to come up with something REALLY cool for this to be useful or worth it, for example, Ive seen a pretty interesting video about controlling the Behringer Deep Mind synthesiser with the hololens.. could be good… again… expensive add-on for a average synth… as in a bout 5 times MORE expensive than the synth… anyhow…
Pokemon GO! is gonna be fucking great on it though!