So Through the Woods…
I`ve been looking forward to this game for a while, its kind of because its the game I never finished making myself. More about that later.
Set in Norway you play a Mother, who on a trip to the cabin in the woods, sees her son get abducted by a bearded man on a boat, after diving in and swimming to the island where the boat went, she must follow the trail of reflectors the boy drops along the way, to ultimately catch up with the boy and his captor at the end of the game.
Along the way she learns of the terrible fates of the previous island inhabitants, who are to be found dead, strewn around broken down villages and encampments.


The game is built up of levels, and is extremely linear, it is simply walking from one side of a map to the other, meanwhile avoiding a series of Norwegian style enemies. Various types of trolls, a very scary female “Huldra” which is a woman with a cows tail, in the game depicted a little like a Satyr, which is not quite right. Some evil and tricksie Wolves, and the main villain, “old Erik”!
An interesting element is the voice over technique, as well as the “in game” sighs and mumblings, there is a post event narration with a different eq, like its a recording taken later, her reminiscing on the terrible ordeal… I liked this a lot. Unfortunately, the English voice-acting was pretty terrible, so I switched it to Norwegian and that seemed better, unfortunately still not great. This storytelling vehicle, basically because it was in the past tense, allowed for some interesting descriptive text to accompany scene switches or new challenges, (“When I saw the cave, I knew I needed to enter, but was afraid”) without it being too unrealistic (“looks like a cave, I should probably go in..”)

Durig the course of the story, the Mothers attitude changes, at first she is anxious, as you would expect, but this is juxtaposed with some awful revelation that she never really wanted her son, or that she didnt love him at first. She becomes a bit more angry, more Lara Croft for a while, becomes distraught (some SERIOUS voice action issues here). Talking to Dan Wakefield, it appears that her moods are supposed to represent
the five stages of grief. Ill quote Dan.
“So there’s the shock of losing Espen, then denial in stage 101 as she runs through in disbelief. She gets more and more angry as the goes through the three levels that make up stage 2, to the point where she wants to kill Erik. She bargains with the wolves for her life, and she hits her lowest point when the witch shows her her terrible past.”
I must say the environments are fantastic, and Dan tells me the work of one man, Torje Dreng Andersen… now as this is kind of MY FAVORITE THING TO DO, making rocks and hills and valleys etc, I was stopping all the time and having a good old look at all the details, and my god there are many… fucking millions of rocks, loads of twigs, sticks, logs, tree stumps. the paths are sometime a bit OVER rocky, so that she (the mother) doesnt seem to walk so smoothly, and the joins between maps are often a bit crap, you know.. you going down a tunnel, fade out, fade in, you are in a new place, with some rocks behind you, but no tunnel… a few are sneaky but ok, Like the good old technique (Also used in Firewatch) of HAVING to drop off a rock into anew area, so you cant get back heh heh.. been there done that… BULK REMOVE Previous level! 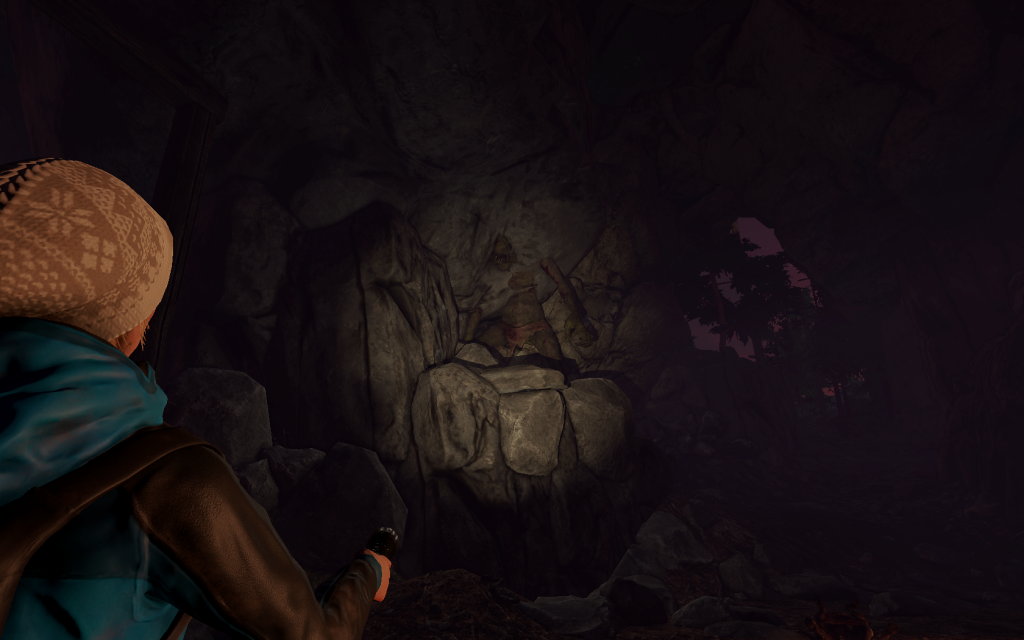 Its not WITHOUT bugs (See above, poor Troll stuck in a rock) I walked off the map a few times, and got stuck a few times, but then again I was “Playing to break” really by always trying to look at the edges, or how he hid something. Theres a bug with the final scrolling titles and the music too guys… music stops if you hit pause.
“Why would anyone hit pause during the titles?”
I hear you ask? well.. obvious really

Yep us Kickstarter guys ill be pausing that title! OH nice Kickstarter book of names “in game” too.. I guess the people ho paid more.

OH.. so I as gonna write somthimg about TRUTH.. but didnt get around to it.. later maybe… TV calls.