If Beck was to be sucked into a vacuum cleaner along with an assortment of squeaky toys and a few old Butthole Surfers albums the resulting cacophony would sound like The Dry Heeves performing their JC and the Dirty Dozen, oh… but wait… the next track Still Life VI sounds nothing like that, a big old distorted bass grooves along to a drum machine set on demo mode, in a wind tunnel. But wait… hang on… Ballad of the Giant Squid is um well… Monty Python, Flying Lizards um.. Coil-ish.. no not really.. er…

Then on “Still Life VII” after a spooky start, swishy swosh noises and spiky hi hats get thrown over a fractured bass pulse… then… ?

Oh god!!! on Voicemail Blues a cowbell and eighties synth… are accompanied by a very strange voicemail message as a hysterical witness recounts a fight between a bible salesman and a…hang on…? This is a joke right?

I’m not supposed to take this seriously am I?

No, probably not… I’ll relax a bit and see how it goes.

Now I get it, it’s great! Every track a new idea, roll up, roll up, every track a winner! Not any big prizes, you understand, no awards or trophies, but maybe a bottle of Cider in the Tombola, or a Purple Teddy bear at Bingo. Their humorous tracks are NOT that funny, the weird tracks are just weird, not experimental, but I don’t really care! It’s like a compilation album, if I don’t really like something; it doesn’t matter, because it’s over pretty soon. Of course it’s all rather cheesy, but there are lots of cool sounds and crazy rhythms which get ruined by bad samples of people putting on silly Goons voices, burping, and giggling at their own jokes, oh they think they are SO clever!

The Dry Heeves are out for a laugh and that’s fine, some of it is actually pretty good, the production is cool, very 90’s hip slacker, but they’re interested in 2 separate things here, this groovy joke electro and some more serious electronica weirdness.

Hilde (my lovely girlfriend) just came in and said it was VERY scary! When I asked why she said that “Joke Music” is always scary, like there’s something outside in the dark laughing at other peoples music. And sure enough a looped metal guitar is joined by some wind sound effects from a slasher movie, and a grating psychotic voice mumbles threats!

But I forgive them almost immediately because of the Gong-like laid back groove that follows… I’m typing faster than they can play now… the ideas start to repeat and I wait for the next track..
HA!
And here it comes!!
AS I SUSPECTED…
Sussed you guys out!!
GOT IT!!!
Ha ha ha ha!!
You are a just a couple of old Residents fans aren’t you?

There it is, hidden right in the middle of the album (Oh I didn’t say it’s an album did I? Well it is.. called “…and I’ll call Rusty” actually) Where was I?

Ah yes… the clue… The Residents Fans with their harmonised vocals… they LOVE this bit.. sounds just like their heroes!! Did no one tell you that the great Eyeball Masters of the Weirdyverse have that voice sound patented?

Just Like chorus pedals are The Cure or 16th note delay chopping is The Edge… We’ve all done it of course…in fact all this sounds spookily similar to the big box of cassettes I have in the corner from my first ever band in the early 80’s when I was 12 or 13…. but really…tut tut…

Anyway… it’s all still wonderful stuff, its great to hear guys having so much fun, and not caring if the girls like them or not! The Dry Heeves are clowns, and we all know how scary clowns are. 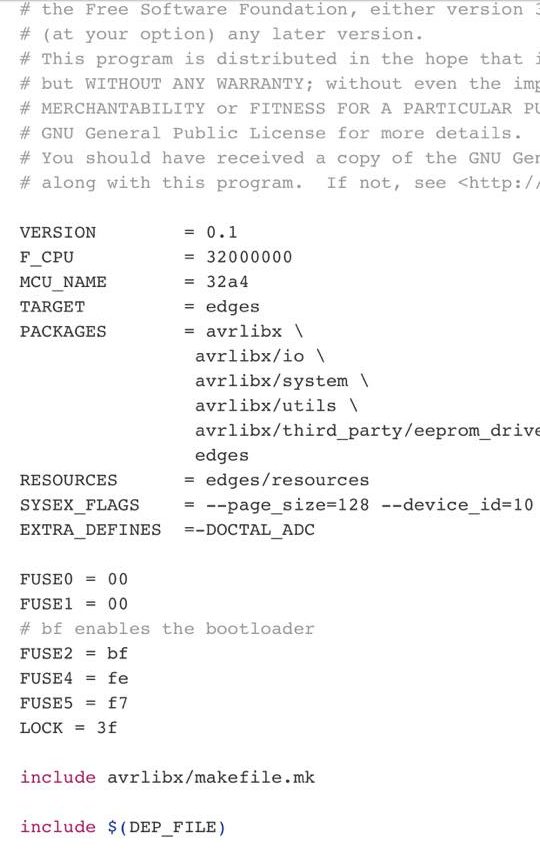 Final stage of building the Mutable Instruments Edges module was to program the chip. Its a different kind than I have used […]