3 years in the making, this game is a big sprawling mess.
It may even be broken.
It may never be finished.

My concept for Truth (aka “The road up to Hell“) was originally to make a multiplayer game, where the 4 individual players played different roles, had very little to do apart from some repetitive and boring quest, and that after a while they would decide to break the rules and go off on their own. Other quests would emerge if they met up, and the final ending would only happen if all four had met.
The game area and graphics are now finished, however, became very slow as I learned how to optimize, multiplayer became a problem, and now I wonder if the whole game can be re-thought out if you play character one at a time, in a single player game, then discovering Adventure Creator as a tool for the game design, which however seems to rule out multiplayer… completely.. or maybe not…
I won’t do “spoilers” here, just in case I get it working again, but, after upgrading to Unity 5 (big no no) it will not open, and I seem to have killed it completely… I know some things to try, but simply don’t hav…
no wait… its working again… hmm…
Story in one sentence (SPOILER) 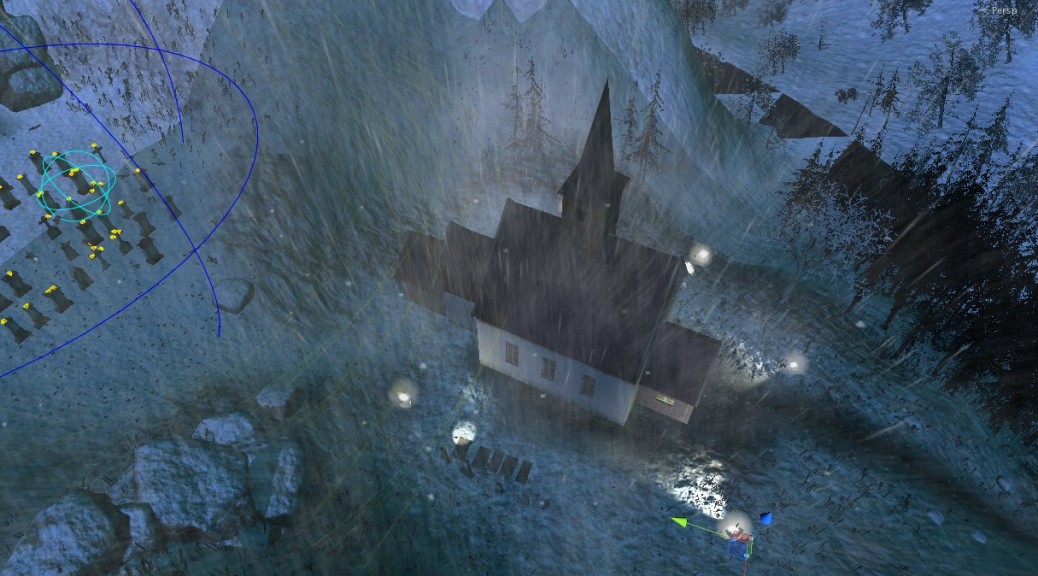 Just a post to show a few more things from the game.
Heres a overview of the Church (based on Nesodden, where I live) showing some rain, and the crow code. They hover around the graveyard, occasionally sitting on graves, but if you walk past, they all fly off… except one! 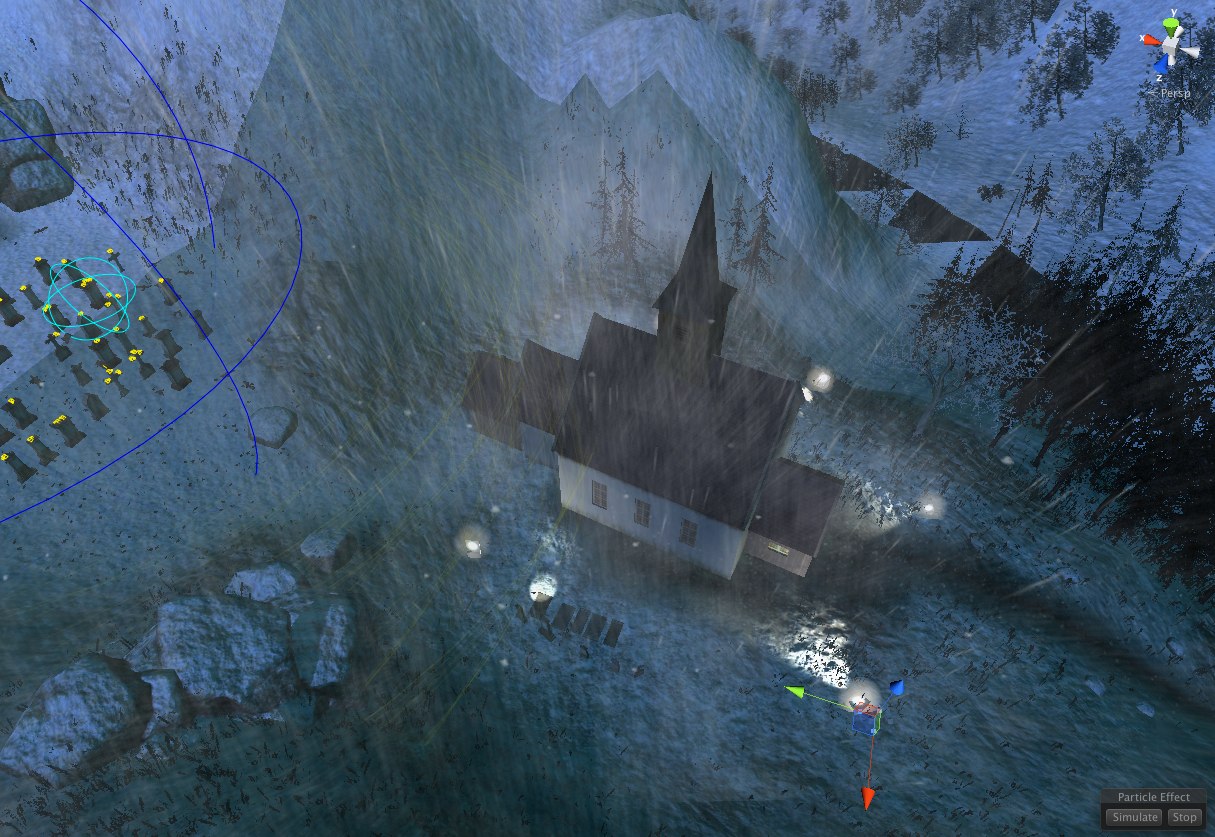 And heres a pic showing the Aunt in her rocking chair, so now she rocks, looks about, and twiddles her fingers.. unfortunately her middle finger twiddle a bit too much… i might fix it.. or not…
Unfortunately I thought I had some kind of accessable blendshape on her face, like I do on the scary girl, but I dont, so I dont know how she will speak… Im considering her having a fag in her mouth the whole time… would that be cheating? A mumbling smoking Aunt.. argh! 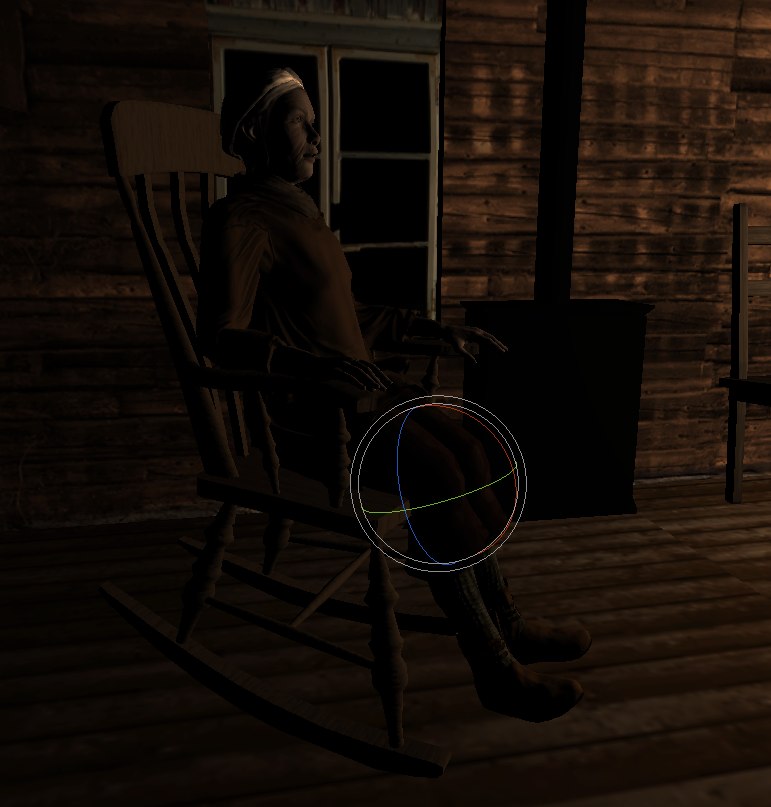 Now my game has chickens and crows! The chicken AI is nearly working, needs a little tweaking when they meet the fence, for some reason they cast their rays thru the geometry’s holes even though there is in fact a hidden collider… I thought it should hit that… but they do turn and walk away after a bit… 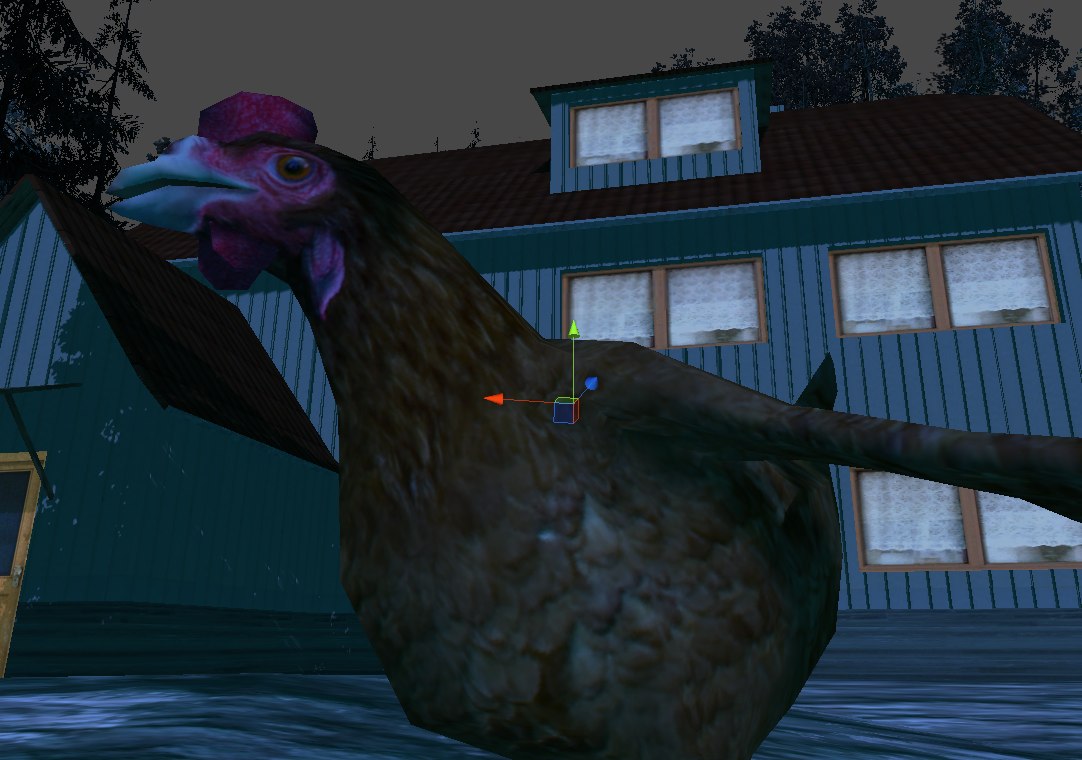 Then the Crows: IM using Bird Flock for this, but with Play Maker addition so that they fly off when you walk into the middle of them and then all start landing again when you leave… 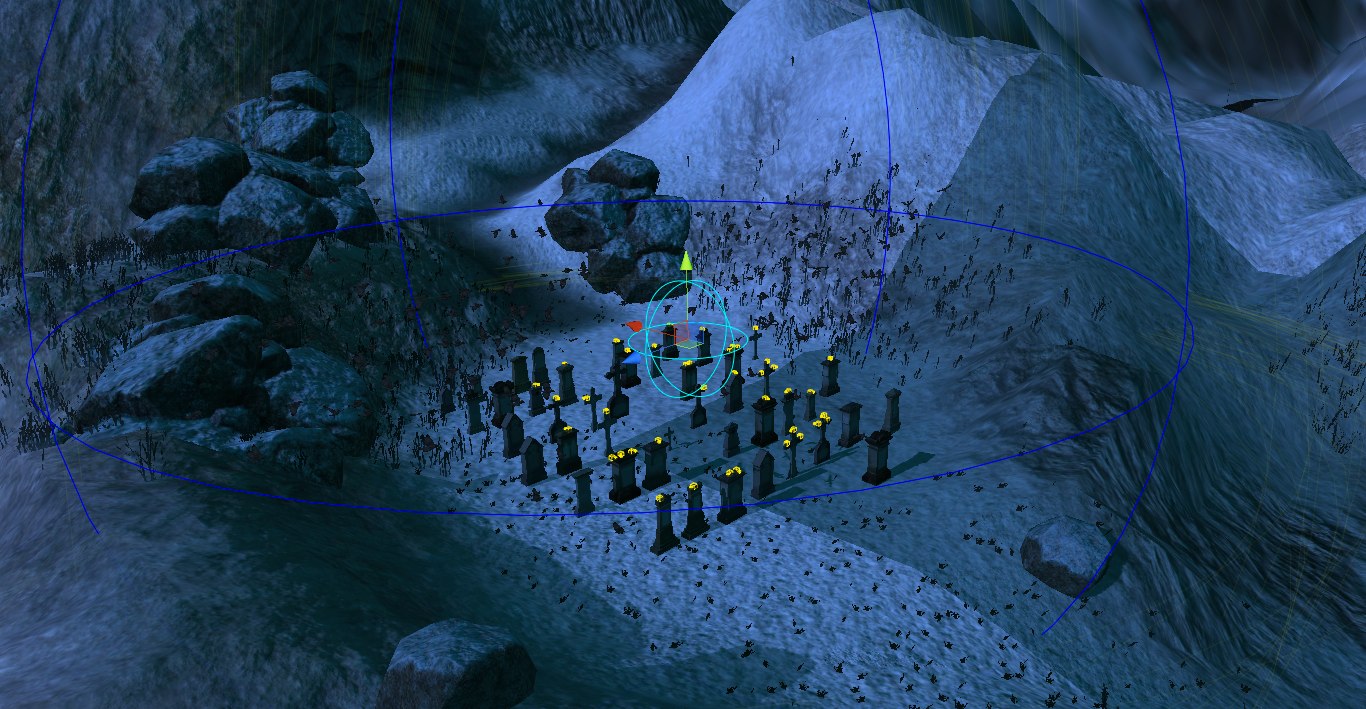 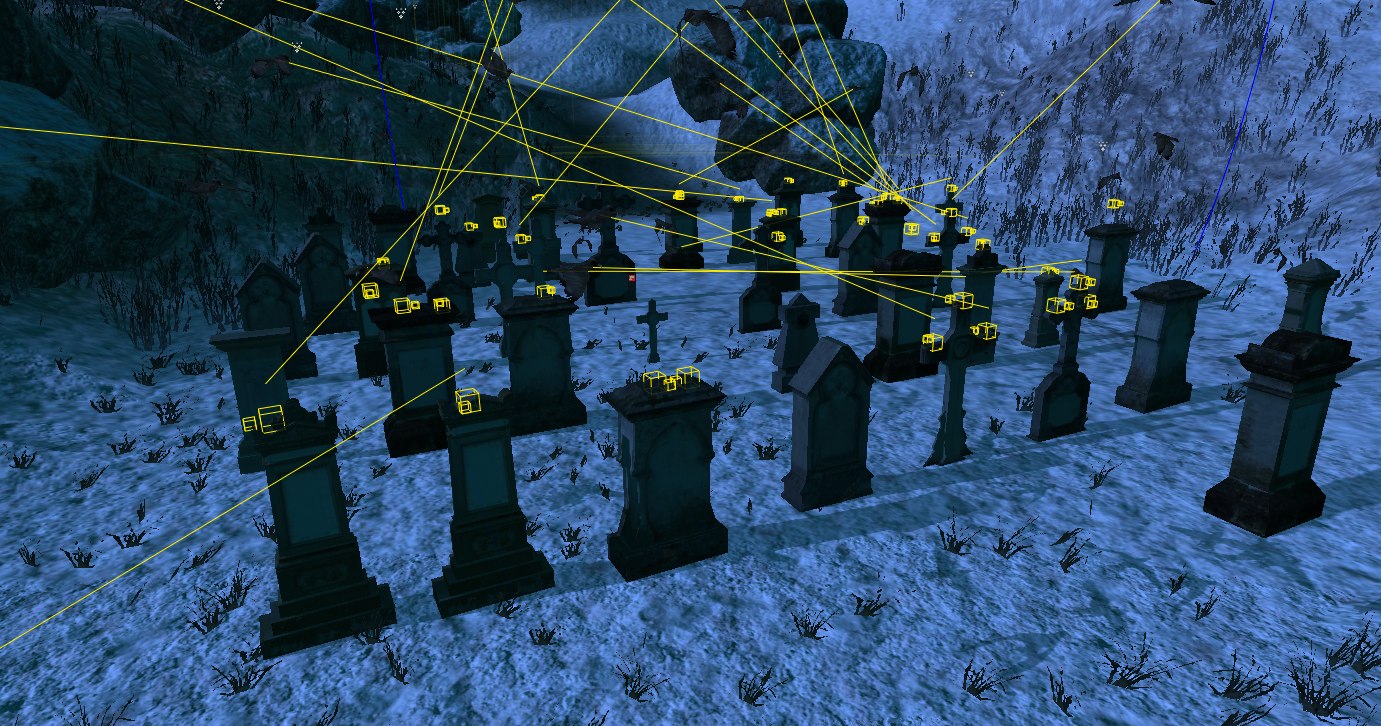 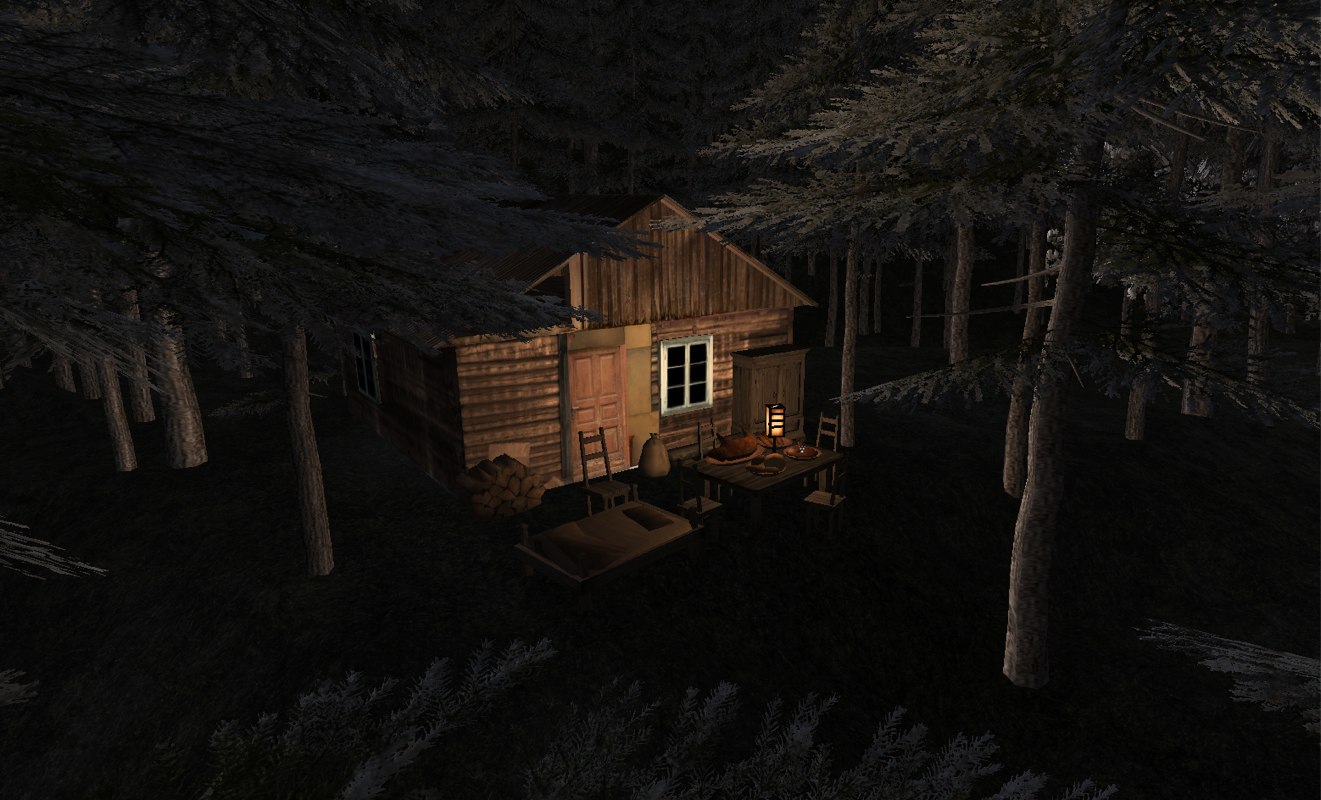 Somewhere in the dark forest lives a little old lady, she never leaves her old wooden cottage, but someone brings her food. She doesn’t know who, but she does know other things. She might tell you some secrets, if you are nice to her.

Why is all her stuff outside?
Because Im in the process of putting it inside of course! Ive used a few things from Asset Store to furnish her house, as per usual, everything is a placeholder, until Im so used to seeing it there that it becomes the thing.


PS:Anyone got a little old lady model?
Actually Im starting to make all the characters in FUSE now. I don’t like the payment model that Mixamo does, almost like a free to play game.. Ohhh Its FREE.. now pay for this… now this… now this… Like Ryan Air! However the Substance method of coloring the clothing makes for millions of options, Im probablty going to have to make a custom Vicar outfit, but thats about it…
But hopefully I can get away with using the free rigging they offer, then use my own animations. Who needs generic animations anyway? we all need to be able to make specific stuff.

Heres showing a typical way to bend your story in “The road up to Hell”.
Will you go straight on down the road, left up the snowy steps into the mountains, or right into the dark forest? 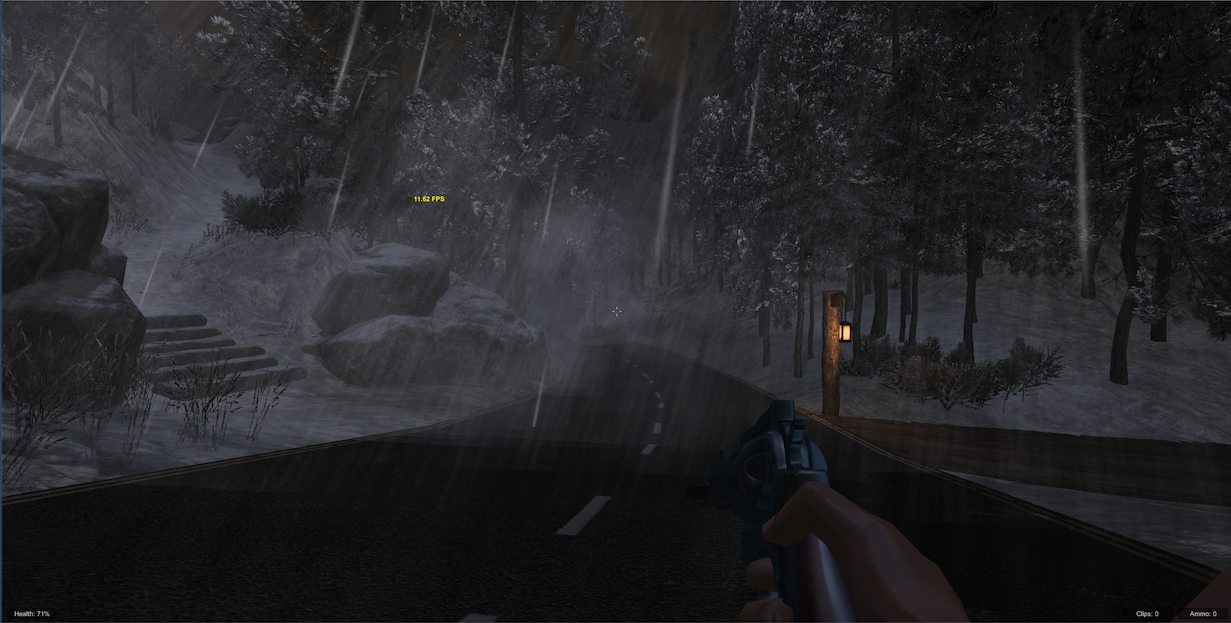 And will the fucking slow frames per second be a problem… er.. Yes… Damn! Working with optimising now…

The road up to Hell is finally getting somewhere, only a few more years to go I think!

After trying a few FPS scripts and frameworks, I have decided on UltimateFPS to handle my FirstPerson stuff. The nice thing is that it has most f the functionality I have been creating by hand, built in! Ill have to learn it of course, but Now I get a mini Inventory, Weapons (not that I need then) picking and throwing stuff, Lifts, doors switches.. everything I need.
PLUS is has a totally awesome addon for doing AI, pretty simple based on A*Pathefinding, but extended to fit in with the UFPS scripts… Nice!

All games need characters, and I need quite a few. I have tried modelling from scratch, managed quite OK, but decided, its not for me. One can´t tackle every job in Game Dev and expect high quality results. However, as a professional film-maker, I know that taking shortcuts is not only an OK thing to do, but the “pro” way of doing things. Its only amateurs that have the luxury of crafting everything by hand. One way is to outsource. Cant do that, got no money. The second is to find a set of tools.
Finally I have found a pipeline I think is going to be OK. The results are very high. But I have some issues. 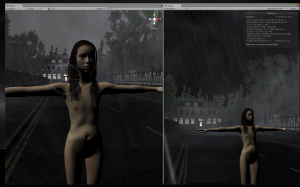 1.Too many tris.. not MUCH too many, its within the larger bracket of modelling detail. But I must try to reduce it.
2. Part of the pipeline involves Blender, so its time to dive back in there, but I wanted to anyway, as I would like to work with open source software.
3. Clothes, although I can pretty much make any character type and model, I will have to model the clothes by hand. Im imagining some kind of nudity for my “monsters” (Theres no monsters in my game, but there is… well can’t say.. ) so mostly IM good. But for the 4 MAIN characters in my game, I will need to model clothes, and then I need the “cloth” to conform to the body morphs as they are… But I think I know how… 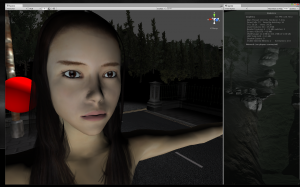 As for now I have made a few character and gotten them into Unity, and retargetted the rig to the simple UNity rig, and thats good enough for me… unfortunately Im going to have to learn how to make a custom rig that is 90% standard, but includes the mouth (I need some gutteral noises). 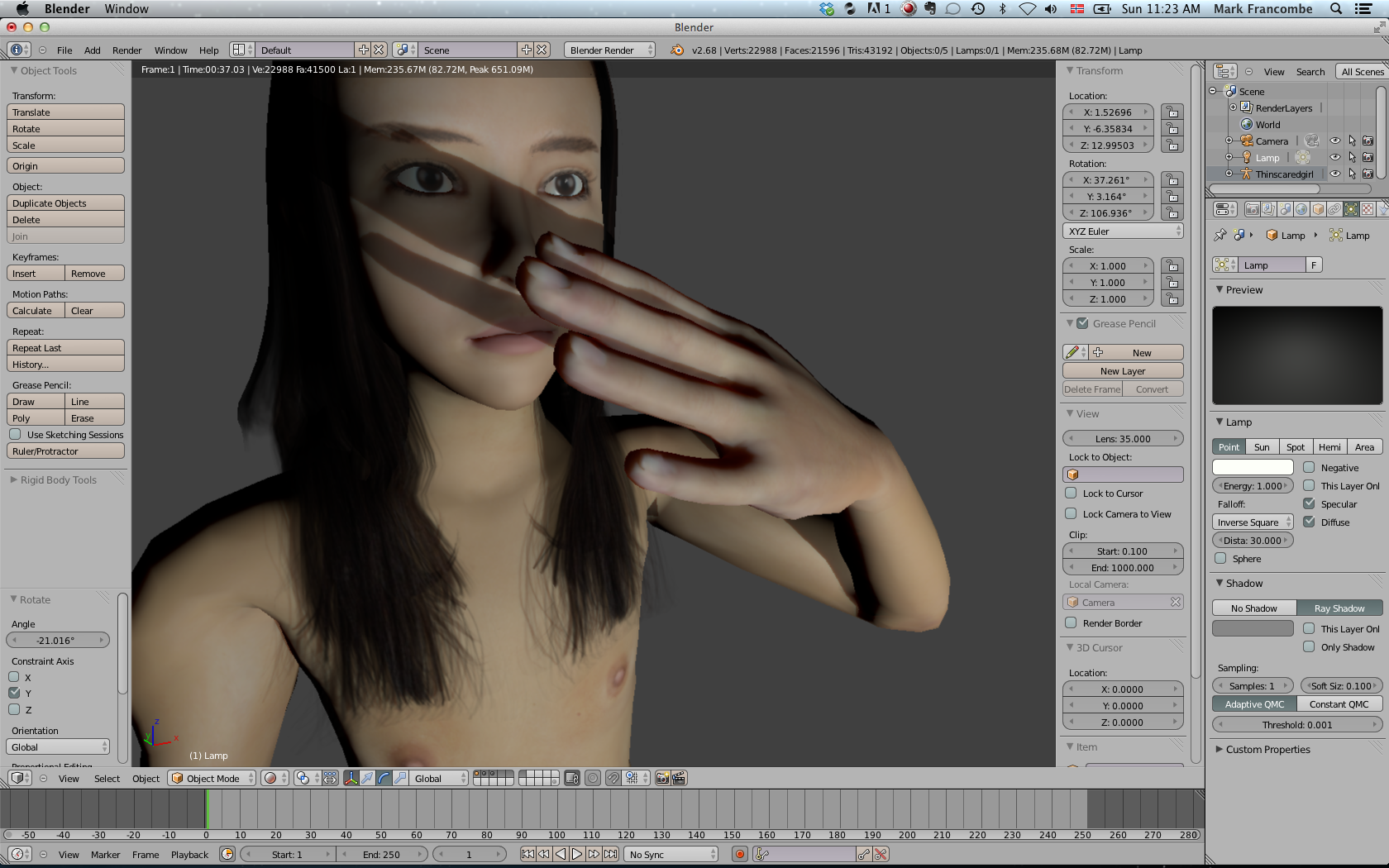 And now I got her into Unity, dumped a bit of MoCap on her, and “She lives”
I cant say what role she plays that would be too much of a spoiler, but, the fact that she has the face of a child, but the height and body of an adolescent, should give you a clue that.. shes not completely normal.
I tried to screen capture her, but running Quicktime and recording at the same time as playing in Unity broght the frame rate down horribly from around 30-45 fps to about 10 or worse, but here it is anyway…

The Girl in the rain from Mark Francombe on Vimeo. 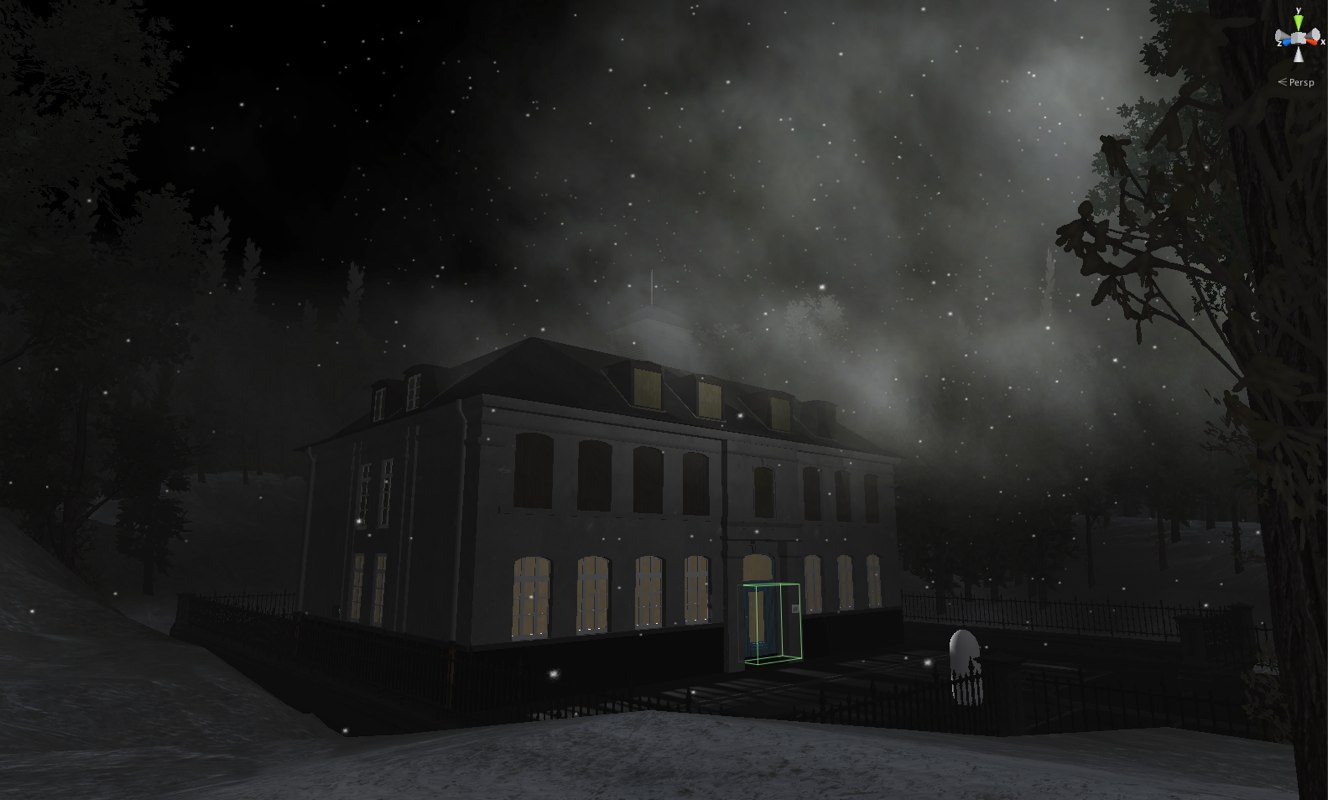 Today I made an interactive cursor and made it possible to click on the door of the hospital, and go inside. Unfortunately we ended up in a corridor round the corner… but still… my first scene loading.. 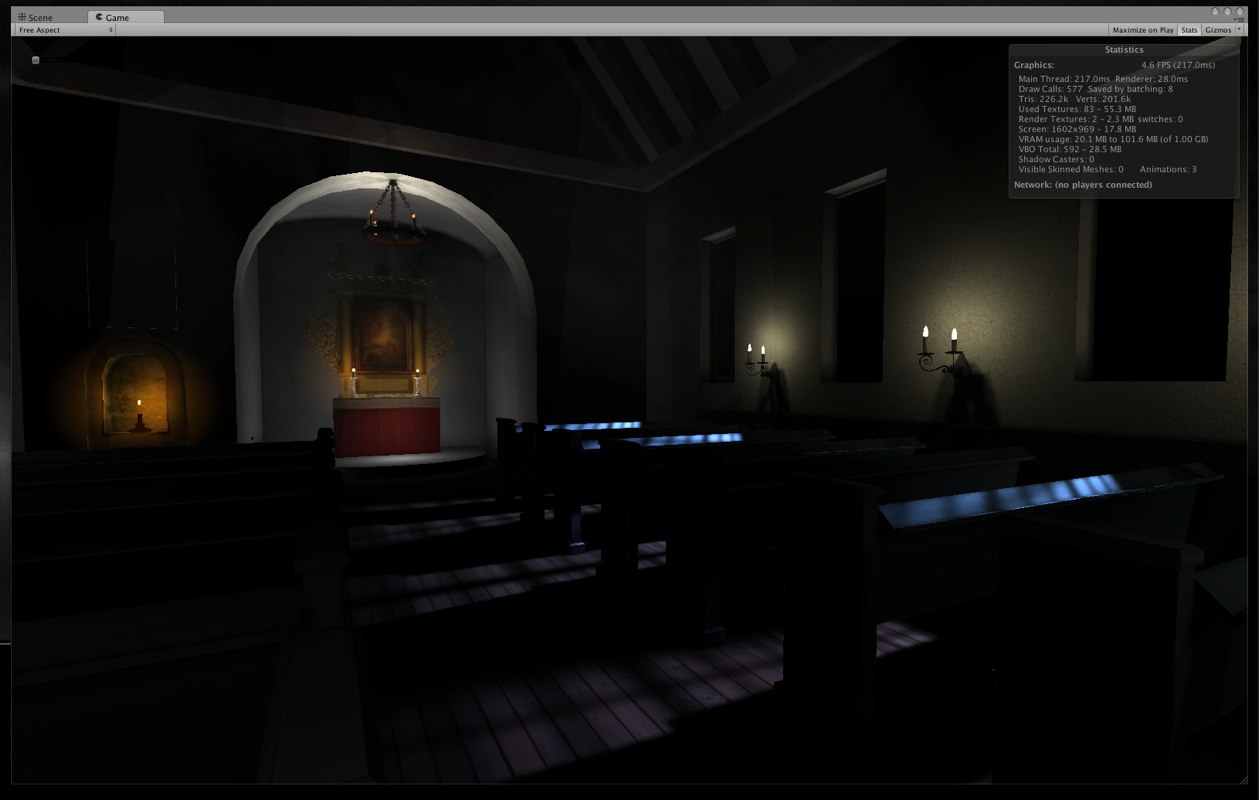 Well the church is certainly getting somewhere now, nice lights, moonlight shining onto the floor, (I love using spotlight cookies)
a few flickering candles (hand made particles?… and pretty ok light map..
but WHAT THIS?? 4.9 FRAMES PER SECOND.. DAMN IT!!!
Unity Geeks… Please come with suggestions?
Lower textures res?
Theres about 1000 trees that you cant see outside… Is that a problem?
Is the church too heavy at 8600 tris? (built in quads of course!)
Theres some serious snowing going on outside, so more particles?
Or.. is it all the terrain?
Or simply time for a new computer?

Things to do: need a pulpit. a small kneeling rail at front, and to stop the snow and rain falling through the roof…, also want to do a sound thing, so that when you are inside the sound of the storm is muffled, have to see how I can interact with the built in sounds of UniStorm.