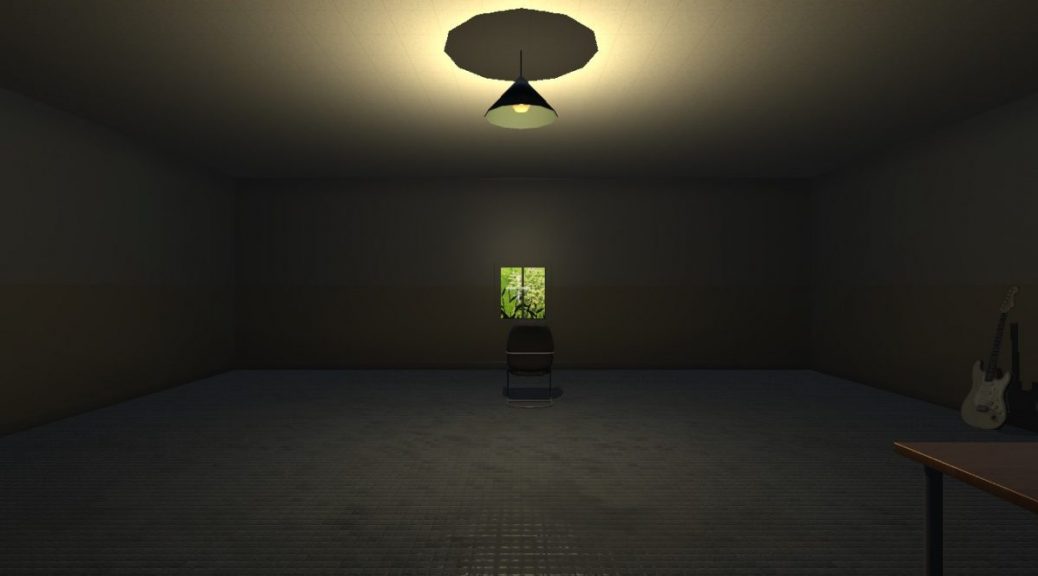 I had the idea of making lots of small VR experiments, each very small, each investigating a few small things about VR, but all playfull and complete in some way.
heres my log of ideas and experiments.

The experiment: working with interaction methods, non touch gui, changing things the user is not looking at, red herrings, can the user perceive a point. External point, environmental, electricity use, continued use of, despite instructions not to, final message of doom delivered by child…

So I finally uploaded this to the app store (only test flight right now)but YAY!

…within minutes James reported he had walked through the wall and gone to visit the girls on the hill. TYPICAL… rather than fix that bug Ill leave it as a feature, but WOE BETIDE someone finds it again! I am introducing a new element that will do away with any namby pamby moaning about bugs…

The Experiment: The feeling of falling?

You are in a room, there is a hatch in the floor, the window only shows a few clouds, or fog. There is a button that opens the hatch. If you jump through. you fall… through clouds, past birds, past a plane, past skyscrapers, into a huge hole (maybe volcano?) into caves, through the earth into the magma, fiery centre, up through the same, out onto Chinese scene high into the air and in through a hatch on a small floating “island” repeat.. if you want…

NOTES:
Maybe NOT use genuine gravity, use paths, and fakes speeds…(rollercoaster effects?)

The experiment: claustrophobia, what feeling can only audio give?

You are in a small and constricted room, almost like a wooden crate. at head height there is a small “slit” window that is on all sides. after a while voices are heard… and faces appear (just the eyes) at the slits. They all talk at the same time. Some people are talking about you.

Experiment: To make a really lovely place, where actually lying down is the only thing that has an effect.

A small enclosed valley… there is no escape. on the one side a small lake with a waterfall, on the other a spooky cave that opens out to an underground cavern with stalactites. The valley has flowers and plants all over and is very lovely… Birds fly over head, small animals can be seen in the distance. IF you sit completely still, and only move your head very slowly, the animals will approach, any movement and they run off…

VR glasses on, but totally black. A voice is heard in the distance.
“Hello! Over here.. turn this way… come to me…”
When we are facing the voice it changes
” Yes thats right now come over here”
and the voice becomes nearer, as we additionally hear footsteps from below ourselves.

If we veer off, or turn our heads, the footsteps cease and the voice goes
“no, come back, not that way!”
Eventually we get close to the voice and the footsteps stop. The voice says, “Oh.. you know what, there was a light switch back where you came from all the time…”

You turn around, and theres a small light illuminating a switch. A small amount of the room is seen…

Just a post where Im going to leave notes to myself incase I forget stuff!

For a Google Cardboard Unity build

First Product/ArchiveThen upload from Xcode organizer  fails so export a version for the App Store and then I uploaded it using the Application Loader (It’s available on the Xcode menu, under “Open Developer Tool”).

Oculus Go envigored my interest in VR and I went looking for the real thing.
The 80s dream of a virtual world where you can have a home, walk about, meet people and do stuff has always fascinated me, indeed my first job in Norway (ok third, first two don’t count)was Astronaut Media who were building a place in the now defunct (or so I thought) Active Worlds for the Scandinavian internet operator SOL. (more on AW in another post soon).
Of course Active Worlds and the later and more porny Second Life are both 2D (er.. yes 3d characters and worlds but not VR… you know what I mean) so they are not really the VR we were dreaming of, but then I stumbled upon AltSpace!
So far Im having alot of fun. and not a price in sight! Is there anything to pay for at all? I think its totally funced my Microsoft, so it’s a good contender for “going somewhere”. I´m in!

For a start, it handles almost all possible devices (except mac and IOS, microsoft remember..) Oculus Rift, Oculus Go, Samsung Gear (still oculus really) Google Daydream (cardboard in a nice box, a very nice box) HTC Vive, Windows mixed reality headsets, and a very usable desktop, non-VR version.
After briefly getting used to controls in my home (Bit unsure as of this time if I can get visitors here, and there seem to be many possible “homes”, I changed mine later to the”Highrise”, I head off to explore, here I am exploring. Again, at this stage Im not sure if Im likely to bump into anyone, maybe I have to invite people to come with me, which means you need “friends”.

Anyway, soon you discover that the main place to meet people is  a cosy little place called “The campfire”.

Here I mostly listened in to people’s conversations (feeling a bit odd about speaking our load in my house incase my family thought I had gone mad). This one fellow, pictured above, took me for a noob and offered to show me a few tricks. These are, picking up stuff. A stick or a firework, and throwing them. This sounds simplistic and sarcky, ok a bit, but it’s a start. Then he showed me how to light the firework, and hit a xylophone with the stick (which didn’t work so well). But now I have a friend, from Taiwan. Maybe I should invite him to my home… Except, its very generic… I wonder what I can do about that?
OK, back at my home I discover I can play videos on my big screen so I do that, then (after some time googling) I find that there are something called enclosures where you can put stuff, this is code you host yourself (or github if you prefer) I follow some tutorials and now I have a Moon hangin and rotating in my room, which is very cool.
Then I discover you can start your own spaces from scratch, which I do, twice, figured Id make to very different places. This proves to be harder than I thought. But I managed to make 2 teleporters to these worlds in my Home anyhow. Ill do something with them later.
I discover Shanes Editor, which appears to be a more advanced editor, best on the desktop version, but haven’t gone there yet, next post maybe.