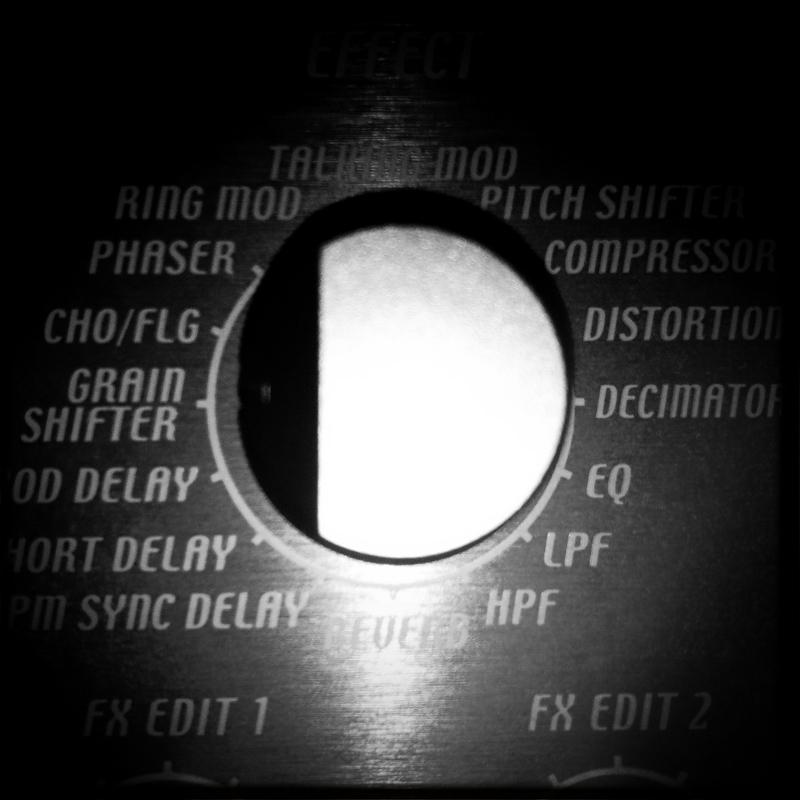 On Nov 28, 2011, at 2:06 PM, mark francombe wrote:
Recent sales of neglected gear have resulted in two purchases. The Korg Electribe ESX (As suggested by Philip I believe) and the much lauded Roland GR55 Guitar synth.Lets take that one now, and the drum-machine later.
On Sun, Dec 11, 2011 at 12:06 AM, Mark Hamburg

OK Then Mark!
Well, a few caveats first, I have NOT had enough time to really go through the whole machine, and some funky issues I have, may simply be NEWB-ness.
Having said that, I dive in. I will say at the outset that I have always been a BIG lover of drum-machines, and have owned many, and wish to God that I had kept every last one of them. I might even make a page on my blog listing them.

**There is no doubt in my mind that this one is by far the best drum-machine I have ever owned. Of course an 808 or a 606 has/had its unbeatable features, but the Electribe ESX1 is a sampler, and as such you can have any sounds you want. Of course pitching an 808 bass-drum on an 808 is always going to be better than pitching a sampler, but this is a new drum-machine with its own sound in a way. It comes with a stack of drum sounds and OK-ish instruments, but interestingly NOT NAMED.. the 808 Bass drum is just called BD-2. And its not stuffed full of sounds (My previous Dr Groove had 512 sounds… I NEVER could be bothered to go through them) So, This is quite good in a way, it encourages you to make your own samples… I have been sampling pins dropping, tiny little sandpaper scrapes, teeth clacking, and plastic bottles filled with water…

But to Sampling later.

The Electribes are known for its live tweakability, and the effect section is great (the reverb however is un-usable) But basically there are 3 effects sends, and every intrument can be assigned to any of the sends. The sends can be routed, machine wide to go from one send into the next. and the instruments can be “tapped” into that chain at any point. So a hi hat can get delay, and a snare can get bit-crushing AND delay.
I am enjoying having three delays with different delay times, and then punching in and out the different times. There is something they call a Motion Sequence. This is grabbed from the KP3 and is automation of your effect tweaking… I think this is probably very powerful, but haven’t really gone into it too much. But alot of things can be solved using this.
For example, I was quite disappointed that it doesnt have proper (OK any) method to adjust individual note volume (velocity). To make realistic drum patterns this is an absolute necessity. Well firstly I though, well of course this is a “dance oriented” machine and as such the subtleties of realistic drum programming are lost on this genre… but then I realized that with a bit of subtle tweaking of the instrument level knob WHILE RECORDING ON THE MOTION SEQ, got me very quickly a subtly varying velocity on that instrument within the pattern. Not realistic, but very very nice.

The fact that every instrument can be modulated by effects, an lfo on volume filter and pan, the length of the sample envelope ( Basic, would have liked an Attack, as well of just Decay) every sample can be reversed and have its in point adjusted live, fantastic for scanning thru a long varying drone sample ( a bit like wave-table scanning).

Which brings me to the sampler section, and types of sample, and the not so OT part of this topic.
I should mention that I knew beforehand that an audio input can be treated by the effects and indeed can have a pattern recorded on the grid, so you can “Trance gate” incoming audio. this is of course fun, but I must admit that I thought that sampling would be just as fun.
I was imagining, and interpreted the manual online before my purchase, that one could A) SAMPLE LIVE… as the pattern was playing, and, B) in much the same way that I understand the Elektron Octatrack works, the sample you JUST made could be triggered by a pre-programmed grid.
Not the case on either of the above. Infact (why? Why? WHY?) you HAVE to stop the pattern playing and sample in a stopped position. EVEN WORSE, you have to EDIT the sample in a stopped position. This to me has resulted in a flurry of forum posts onto the quite dead Electribe Forum, regarding HOW THE HELL CAN YOU EDIT A DRUM LOOP IN THE MACHINE. If you cant hear it looping IN SITU, you can’t tell if you have the right in-point. You can always find a LOOP point ok, but does that loop sit, in sync, with other elements on the grid? You cant tell wothout going out of Sample editting mode and listening to it in a pattern, and IF you are planning that to be one of the “special sample modes” its even worse, cos you have to perform an operation first.

So The ESX went, for me, from being a potential weird LIVE LOOPING DEVICE, to being… well… a drum-machine.

God… 20 years ago, I was LIVE sampling into my Akai S1000 while it was triggered by my Amiga Computer running Octamed… And you cant do it now???

Second sample issue: The pointlessness of the Stretch and Slice samples.
There are 3 “types” of samples on the ESX. A regular one shot sample, meant for individual drum sounds. Great, no arguments here… On these sounds you have all you need to edit the sound on the front panel, as the ESX has a knob for Start Point.
But the other modes???
Stretch part: A time shifted part (you have 1 stereo slot, or 2 mono) that will stay the same length however you pitch it.. lots of fun.. BUT IF YOU CAN EDIT YOUR SAMPLE SEE ABOVE. you HAVE to get the sample length exactly correct because when you run the program that turns it into the Stretch Sample, it has to divide correctly. but If you cant edit in sync with the drum machine, it pretty impossible to do.
But then THE TOTALLY pointless SLICE part. “What you you mean Mark? Isnt this like a Rex file on Reason? But arnt they cool as F***???) Well yes it is.. This (for the younger amongst us) was the method we used in the old days, to enable speeding up and slowing down of drum loops. One slice the loop into 16 beats ( I did 8, couldn’t be assed) BY HAND, on our samplers… (lots of maths and keeping notes to not erase a slice by accident and lots of annoying naming with a scroll wheels) So that when you programmed your beat you assigned one slice to a different note and then played a scale on the sequencer to re build your loop.

This you can do on the ESX, infact its easy! But then… the next (AND IMPORTANT) part of slicing was that it gave us the ability to rearrange a drum-loop… who cares about speeding it up, we can do that in other ways not (see STRETCH PART above) but no.. REARRANGING DRUM LOOP SLICES CANNOT BE DONE ON THE ESX!!! So what CAN be done? Well you can mute bits of it… thats it… totally pointless!!!
OK.. there IS a way to take a drum loop, slice it, then assign each slice to a REGULAR sample slot, and re prgram you beat THAT WAY (Infact this is a nifty way to load up a whole bunch of drum sounds. Put them all into one big Wav fale then slice it, and then add then BY SLICE to the regular pads- it also saves onf ESX memory “slots”)
So I really dont have a clue what they were thinking here… Its like they knew that thsi technique was used in Break-beat music, but never fully understood why!

I got some ansers from the forums regarding HOW people were editing samples ON the ESX… There are not, they are just importing drum loops from the computer. (I have another problem with this … see below)

Its beautifully made, strong, metal, heavy and a joy to play with as a result!
The demo songs, (though crap) do demonstrate what is possible on this unit, and if you were doing dance music, I would say maybe you need nothing else.
I cant currently get samples off my computer and on to a SD card, but this maybe an issue I can solve sometime. It might be the type of card or I might be able to run some kind of software, but weirdly Korg don’t make a editor software!
OH, and the Valves.. a gimmick.. they sound horrible. turn them off! Warm distortion.. my arse! (there is some talk of swapping them out for an alternative valve, making some improvements, but its NOT like the valve distortion can be assigned to one instrument, its to the whole damn mix… who needs that?)

As Mr Walker said, about my GR55 review, Ive been REALLY critical here… remember Im a grumpy Englishman and as such always look for the worse in things (people) After all this criticism, I want people to review what I said right at the start of this review. The place I marked with two asterisks …
**
thus.