Sten Ove Toft has been of a mainstay of Norwegian Noise for sometime and his Roggbif label is turning out some of the most interesting and aggressive music from the genre.

The first time I met him however, it was a somewhat quiet affair.

I had received a txt msg from someone saying “You should like this” a time and an address. So, I went, a poster the size of a BandAid (infact it may even have BEEN a BandAid) adorned the door… I pushed and went in, up a windy, dirty staircase my footsteps reverberating in the stairwell – “Is this a concert” I said to the silence, “or what?”. At the top I was met by a very friendly face (This was the aforementioned Mr Toft), that confirmed that I was indeed in the right place and not breaking and entering as I was beginning to think.
“Der koster tretti kroner” He whispered… yes, whispered, I handed over the thirty kroner as requested, and he lifted a curtain to let me enter “Hshhhh!!!” he hissed as I ducked thru…
It took me a few moments for my eyes to become accustomed to the dim light, but i could hear some faint breathing sounds and some distant clicking. Then, through the smoke filled room, I finally made out one man stroking lovingly the body of an enormous double bass and another fellow seriously and carefully plucking an amplified cactus.

That was three years ago… tonight was a tad noisier. Ryfylke, the main vehicle for Mr Tofts onslaught of brutal noise, took the stage at midnight and were done by twenty past. A slow progression from tasteful, planned and remarkably hi fi clicks and scrapes that built and built to an unholy roar which seemed like it could go no further, but then did. Toft screaming into a microphone that bottomed out the PA system which actually created spaces in the wall of flatline distortion and brought dynamics to the sound.

I caught up with Sten Ove before the show:

>How and why did you start Roggbiff (it is YOUR label right???)
Yeah, Roggbif is my label, as well as the sublabel NOISE2. Roggbif started in 2003, after I moved to Oslo. I started it more as a time-filler; I was making music of course, but generally I was bored with my studies at the university and my part time job at a primary-school. Having just moved to Oslo I didn’t know that many people either so Roggbif is a result of boredom than anything else – haha. But the real purpose behind the label was to archive my own releases which previously only had been no-label releases, CDR’s and tapes made on demand.

> First release was?
The first release on Roggbif was Devold: Ola By Rise EP. It was – as it is for many labels – a cassette release. Devold was a project between me and Sindre Andersen (whom released the first Fe-Mail album on his label TV5). It was only made in 30 copies and was more given away to reluctant friends than traded or sold. The resources and knowledge I had back then was little. I had a hard time finding tapes which were short enough to cater for the 15min long record, I only found C-90 tapes, so the tape has the same 15min track, going 3 times on each side!
I then went over to CDRs – faster and cheaper. I found it to be easier to make and sell. But in 2004 I released my first “real” CD which was the debut album by Ryfylke, “Boknafjord”. That was quite wierd, that album actually sold a total of 1000 copies, which one normally doesn’t do within noise, not even on a worldwide basis unless your Wolf Eyes or something like that. So now we’re in 2007, and I’m up to 17 titles, a couple are yet to come, but the “boknafjord” album gave Roggbif a name on the international scene, not a big one, but it’s at least out there.

> When did you start Ryfylke with Stian Skagen?
Ryfylke started in 2003, when Stian and I both got into the art academy in Oslo. We were just talking, and had somewhat the same interests in music. We had some spare time one day and decided to do a small session in the schools sound-studio. We where both blown away afterwards, we thought this sound-combination was really fucking good. So there you go. 2 weeks after we played our first concert and now, almost 4 years after we’ve toured Europe twice, going to the US tomorrow and released 2 studio-albums and been on several compilations.

> So.. How did you get into noise in the first place…and whats so great about it?
I started up with noise/experimental sounds in 1999 i think, heavily inspired by my hometown’s (Haugesund) alternative festival Safe As Milk. A year later I ended up enrolling in the collective and started working as a artist-contact for the festival, and I was in my element. In the beginning I was more into quiet musique concrete stuff, like Tore Honore Bøe, but like olives, the craving started and I got more and more extreme, listening to Japanese stuff and trash noise from the US. It was great to have this curiosity and explore. Hearing stuff you never thought was possible. Amazing. Now I’m really into the trash-sludge noise. Just the pure essence of noise, the energy.

I reminded Sten Ove of a performance I witnessed a few years ago, that took place in an old chocolate factory, where Toft and his cohort proceeded to fight each other viciously, in a somewhat school playground fashion it must be said, rolling around the floor, smashing their own equipment of CD players and TV and effect pedals to pieces, while dressed in branches and plastic bags… a genre that some friends of mine have dubbed “Happy Noise”!

That project was called “Brølelabb & Bråkifeijs” it has a direct link to the Holland/US scenes with Fucking Bastards and Cock ESP.
We did some performances with that project in 2005/2006 and every time we ended up getting really bruised and damaged. That’s the only time drinking allot before the gig (I slugged a bottle of whiskey before that chocolate factory gig) actually helps the performance – it gets much more brutal because you don’t think of the consequences of what you’re actually doing. I even smashed a laptop at that chocolate factory gig, intentionally, but still. I don’t think there’s many people who can say that they’ve done the same.

Sten Ove Toft and Ryfylke are touring the US as this goes to press, and yet weirdly don’t print their dates on the site www.roggbif.com Maybe that will change.

So for the stout of heart, there follows a quick rundown of some tasty bif morsels from Roggbif Records:

A three track split album of ambient noise pieces from Ryfylke collaborator Stian Skagen, Morton Norbye Halvorsen (or MHH as he prefers) and Sten Ove Toft. The title takes it name form the chemical composition of bird flu, the music however, although varied over the three tracks, has a coherence that suggests landscapes and weather and reminds me of Brian Eno fro some reason.
Skagens chilly hisses, Halvorsens crackles that burst surprisingly and delightfully into a few minutes of digital disco and Tofts monumental grinding of tectonic plates, makes for a strong and powerfull trio of tracks for people with big Hi Fi speakers.

This hour long piece of asynchronous percussion loops is a powerful and by no means unlistenable onslaught to the senses. This is heavy stuff and quite an ordeal to listen to all in one go, especially when loud, but the slow and gradual change through out the piece is really quite mesmerizing and when the track ends and your room fills with silence again, its quite a cathartic relief, like you got your private space back after a gate crashed party. The press release says its pure power tribal noise to resonate the beasts, which it most certainly is. However it goes on to say that one should not listen to this while sitting down, I am not sure why exactly, as I was indeed mostly sat down, and I’m just fine.

Another Toft project is Waffelpung, which could be a kind of beginners guide to noise, spanning the many different sounds and possibilities that could come under the noise banner, from good ‘ole harsh noise, some droney stuff, some almost ethnic bell tones, field recordings, quite a large dollop of glitch and tape collage, and most tracks coming in under a cosy 4 minutes, which is really rather remarkable!
I love this record, especially “Mannevold” which contains all of the above, some disorienting panning and a kind of laid back, unhurried quality that I haven’t heard since some of the 12 inches by 23Skidoo which this also slightly reminds me of. Although this mood is quickly dispelled by “Craic’s” ear splitting high pitched feedback tones. You know, really every album should let some mice eat a microphone as the final track, at least that’s what it sounds like.
Wonderful !

Another three splitter, starting with “Bolts Unfolding” a hellish swirl of crunchy digital noise and tone mangling from Jon Eriksen, moving on with a Toft piece that almost imperceptibly builds from silence to total chaos, to the orchestral drone from Utarm a majestic and rather pompous guitar is joined by piano, strings and crashing percussion all of which is enveloped in a warm duvet of reverberation and echo.
The compilation is ended by an almost identical track as the first from Jon Eriksen. I liked it the first time, this time was a tad too Merzbow… even for me.

Roggbif… for those that were wondering stands for the initials of the colours of the rainbow, in Norwegian. (Rød, oransj, gull, grønn, blå, indigo, fiolett) which I suppose makes sense, and I could make some lame arty farty reference to all the colours of the spectrum and how when mixed make white – white light – white heat – white noise but that’s not really going anywhere and anyway now I can’t get that horrible Pink Floyd Album cover out of my mind now… damn! 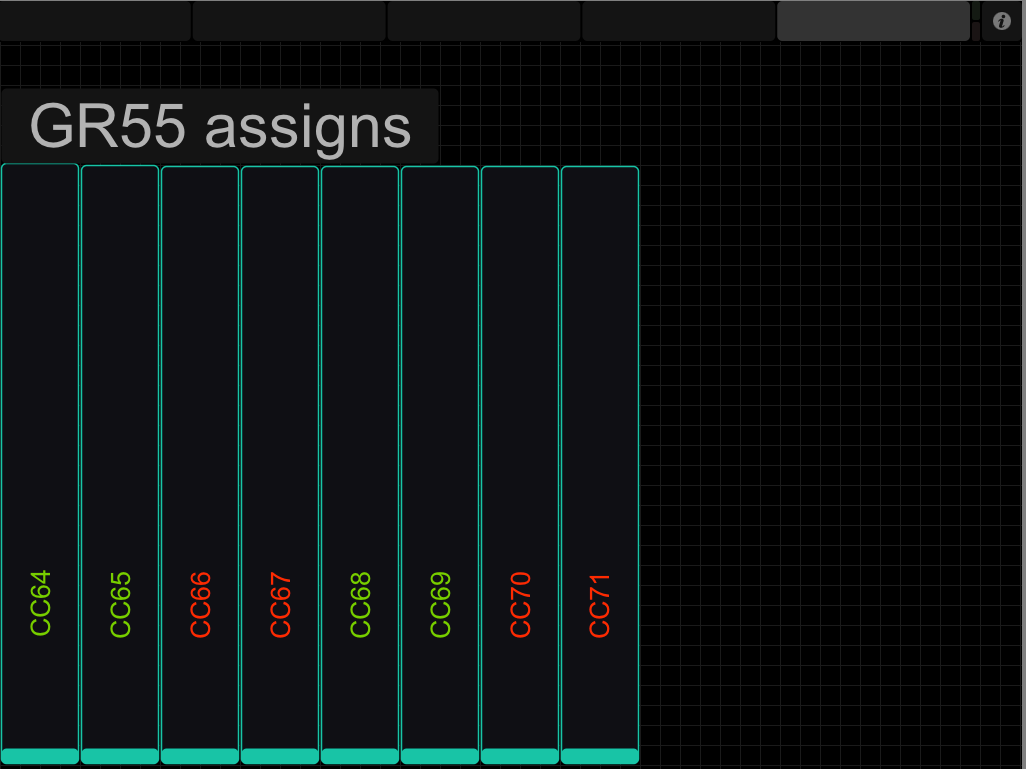 I have been working on a Touch OSC template for the my gear,for use with the missing link, here is is:www.markfrancombe-com/plugins/repeaterPadv3.touchosc The […]

Trying out face warp on my phone. What a silly thing!